I’ve done my share of research for previous projects. Usually deskresearch or some times real life investigations; like making our target audience participate in our ARG(Alternate Reality Game) and observing them as they go along as well as receiving feedback afterwards. But this was the first I’ve actually done research of such magnitude with this much information.

Initially I set out to better understand the working of creating a, somewhat, scientific paper; having well defined research questions, finding information, filtering information, and creating a final document, which is clear to most levels of expertise in the field, all while maintaining a clear overview of the project.

Defining your research questions proved quite difficult when you know, just about, what you want but you can’t fully encompass it in clear goals. This fact made the initial setup to the research take a lot longer than anticipated and was largely to blame to the fact that we, unknowingly, kept the research questions vague resulting in the gathering of information without a clear goal to strive towards. Later on these questions were ‘sharpened’ and this resulted in clearer goals. It’s become apparent that the research questions that were originally supplied in the graduation-document do not fully stand for what we want, so they will be probably rewritten. However they do show the overall picture we want to achieve and it is no way wrong to make your research-questions better as you go along.

Personally I like the gathering of information, a trait I suspect belongs to me, getting a better understanding in something I’m interested in gives a nice intrinsic motivation. Even now while we haven’t fully concluded our research part of our graduation I feel I’ve learned so much in the field of horror, and the subfields of things such as psychology, game-design, story-telling, etc, that it is already worth the time that we’ve invested in it. Now my only concern is that we might not be able to convey this fact to others, as the information we’ve picked up might not make it in the final document. But we’ve implemented, from the beginning, a system where we write small(not always) summaries of things we’ve read and find of importance which is already over 90 pages long, which is fun to see.

We’ve talked a lot with people about our document set-up and we’ve received some good advice on how to make it a more sensible whole and I personally enjoy watching a document grow into something comprehensible and understandable for other people.

Next to the deskresearch we’ve also done some practical research into physical reactions of people on horror. This means we’ve strapped a heart-monitor onto ourselves, put up cameras and recorded these during play-sessions of horror games. The information that came back gave us the clear impression that yes, there is a change of hear-rate during stressful moment but this does not (fully) show people’s psychological reaction. Do they find this truly disturbing or does the subject-matter make them feel uncomfortable. Also the system was prone to erroneous readings; picking up a cup of coffee spikes the heart-rate. These kinds of things you only find out when you try things out; comparing the footage to the heart-rate and examining the environment.

I also created a web-application to allow the examination of research data, which was a lot of fun to do. Also it added great value to the data which otherwise would be very difficult to interpret. 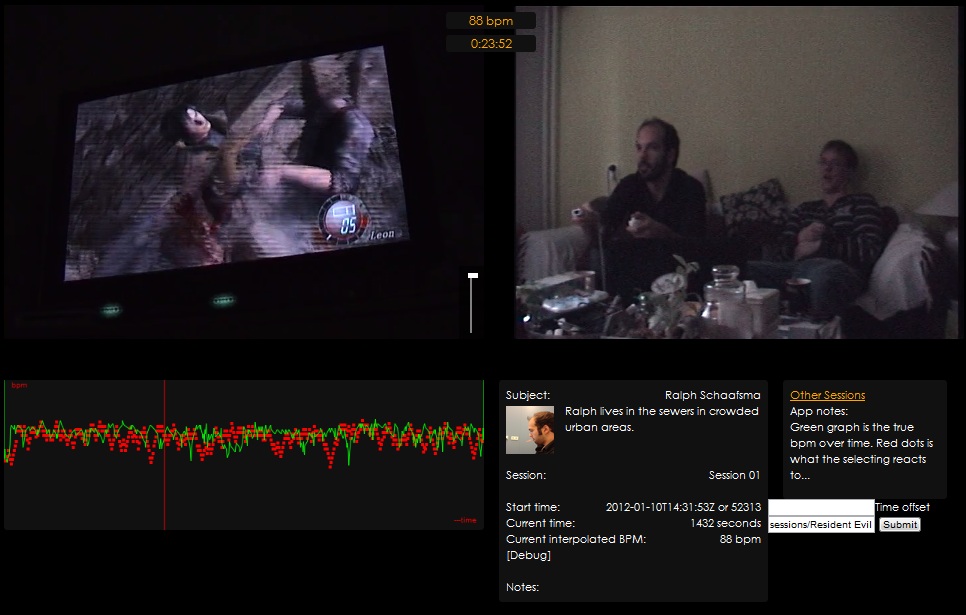 It must be said here though that Resident Evil 4 is, to me, more an action game than an actual horror.

So even though it is taking longer than expected, the value the research will have is immense. It’s quite satisfying to do research that you feel is important, relevant and helps you later on in development.

A blog of sorts where I, Ralph Schaafsma, post stuff from time to time. Stuff regarding programming, game-design, game-engines but also about other kinds of media or perhaps some mechanical stuff about my VW van.